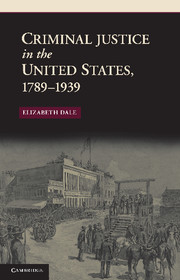 
This book chronicles the development of criminal law in America, from the beginning of the constitutional era (1789) through the rise of the New Deal order (1939). Elizabeth Dale discusses the changes in criminal law during that period, tracing shifts in policing, law, the courts, and punishment. She also analyzes the role that popular justice – lynch mobs, vigilance committees, law-and-order societies, and community shunning – played in the development of America's criminal justice system. This book explores the relation between changes in America's criminal justice system and its constitutional order.

"This fine book provides both a broad synthesis and a thought-provoking interpretation of criminal justice in the United States from 1789 to 1939. Elizabeth Dale's analysis contains many moving parts: federal and state governments, courts and legislatures, judges and juries, constitutional rulings and lynch mobs, and more. The book's emphasis on the ever-changing interplay between formal law and popular notions of justice invites readers to reflect on the enduring tension between the rule of law and democracy." – John Wertheimer, Davidson College

You can find the cloth and kindle copies on Amazon, and they'll ship the paperpack later, but in the meantime you can request an examination copy from the press.